Forex fundamental analysis is a way of analyzing asset price movements in financial markets based on economic data and news that is the center of attention of market participants.

Traders who perform forex fundamental analysis will observe how economic data such as inflation and unemployment affect the assessment of good or bad economic prospects of a country, then examine how it affects currency exchange rates.

1. Plans to increase the US central bank’s interest rate (Fed Funds Rate / FFR) usually encourage the strengthening of the US Dollar

In order for the central bank to raise interest rates, inflation is needed on target, the unemployment rate is low, and economic growth is stable.

If there are indications of sluggish inflation, rising unemployment, and slowing growth; It can have an impact on the failure of interest rate increases, so that fundamental analysis users will view the US Dollar as bearish bias (sell on the US Dollar).

2. Greece is one of the countries in the Eurozone 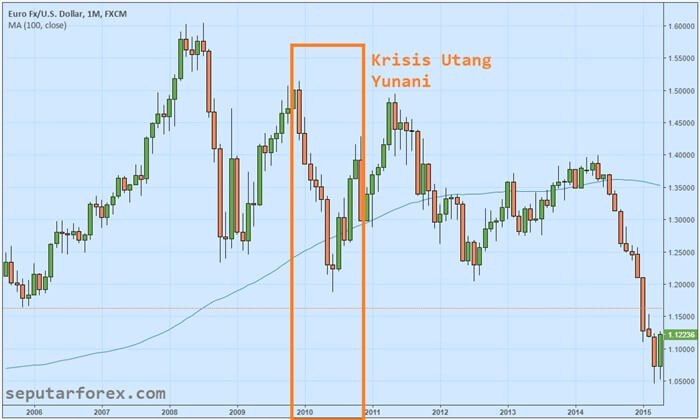 After rumors of a debt crisis emerged at the end of 2009, Greece faced the threat of default in early 2010.

The news surrounding the debt crisis has made many market players worried that it will spread to other European Union countries, or even cause the European Union to dissolve.

As a result, the Euro is under heavy pressure, as seen in the following chart. The new euro was able to move after Greek debtors agreed to bailouts and easing of debt repayment schedules several times.

A trader who uses fundamental analysis will tend to consider the Euro bearish (sell over the Euro) during the Greek crisis is considered high risk.

Also read: 8 Checklist How to Choose a Good and Trusted Forex Broker

Basic of Fundamentals Analysis in Forex

In forex fundamental analysis, a good economic outlook is usually translated as an opportunity to strengthen the currency exchange rate.

Meanwhile, if the economy deteriorates then it is considered to be able to weaken it. However, the interpretation of the economic outlook and its impact on the currency cannot be done arbitrarily.

Generally, novice traders assume that as long as the economic data is getting better, the currency will definitely strengthen. However, this is a mistake. In fundamental analysis, it is necessary to understand that:

1. The driver that drives currency exchange rates up and down is not economic data, but the attitude of market participants

Market participants usually have their own expectations before economic data is released. If expectations are not met, then the data is considered bad. So, traders cannot only take into account the latest data and the data of the previous period.

In the Forex Calendar, data for the previous period (previous), expectations (forecast), and the latest data (actual) will only be filled after the relevant report is published. Therefore, the Forex Calendar is an important ‘weapon’ for fundamental analysis users.

Forex calendars usually classify important events into three, displayed in the form of a bull’s head symbol, a club sign, or a color code. In the image above, the symbols mean:

Also read: 4 Ways How to Distinguish an Honest and Scam Forex Broker

2. Price movements are an accumulation of the attitude of market participants in responding to various news from many countries, not just one report

If you are trading the EUR/USD pair, you have to take into account global fundamentals, the United States and the Eurozone. Just the news of rising US interest rates will not be enough to make the US dollar strengthen.

Moreover, in the case of the announcement of US interest rates, the more influential factor is usually the speech of US central bank officials, not the nominal interest rate itself.

3. The health of an economy is shown by balanced and sustainable growth, not by numbers alone

For example; Too high inflation is considered bad, but too low inflation is also not good. Usually, the authorities of each country have different specific targets or references.

On the other hand, the same number in developed countries may be good news that can boost the value of their currency.

Also read: What is a Forex Broker? This is the Definition and Regulations!

4. Every policy taken by the government and the central bank is a trade-off

Decisions made at the expense of one aspect to achieve improvement in another. Therefore, no policy is perfect without any negative effects at all. The assessment of the policy should be based on ‘is this going to attract investment funds or not?

The government’s job is to balance the various trade-offs to achieve stable growth; Not make decisions that make everyone happy.

So, a trader should not have the wrong opinion like ‘because a lot of people protest against such a policy, it means that the policy is bad and the currency will fall’.

The investor’s perspective is always profit-driven; Even if a policy is rejected by the people, if it is good for the investment climate it will be welcomed.

Also read: 10 Rules and How to Trade Forex For Beginner Traders

Guide and How to Learn Forex Fundamental Analysis for Beginner Trader

To understand fundamental analysis correctly and completely, a trader should study economics and its relation to financial markets, including macroeconomics, monetary, fiscal, etc.

However, a trader doesn’t have to have an economics school background to understand it; Even an economist is not necessarily able to do fundamental analysis correctly.

So, what must be done to master fundamental analysis? Follow these steps:

If you do not understand the specific terms in forex on this page such as monetary and fiscal, you can visit the Forex Dictionary. Take advantage of Forex Dictionary when you encounter new vocabulary for optimal understanding.